“Flip Wilson: Are you trying to tell me that down there, you've got flood lights, a tennis court and a swimming pool?

Oscar the Grouch: You'd be surprised what people throw away.

Oscar's trash can is the private domain of Oscar the Grouch on Sesame Street. It is situated between the 123 Sesame Street stoop and Big Bird's nest. Like Doctor Who’s TARDIS, the classic clown cars or Snoopy's doghouse, Oscar's trash can is considerably deeper than one would initially suspect. The seemingly bottomless domain houses a variety of diverse Grouch amenities and luxuries.

In the earliest episodes of the first season, the trash can was atop a big blue crate adjacent to a wooden crate at right, with a few more trash cans around; later on in the season until 1974, the base and the crate were replaced, the latter by a trunk, with a trash pail on top of another crate at left. In 1974, and for the remainder of the show's run, the perch was redesigned, with a big burlap crate replacing the trunk and a barrel as the base, and the rest of the area consisting of more crates, a garbage pail and a trash bag.

In one 1975 episode, Oscar installed an Olympic-size swimming pool inside his trash can.

The 1989 book What's in Oscar's Trash Can? and Other Good-Night Stories mentions the swimming pool as well as an ice-skating rink (which, on the series, has been used by Peggy Fleming) and a bowling alley. According to Sesame Street Unpaved other items include a piano, art gallery and hearth and a train set ("Grouch Central Station"). A 1970 article in Look Magazine also notes a pastry kitchen and a rococo staircase.[1] In the Elmo's World installment Farms Oscar gives Elmo a tour of his farm (shown in darkness with only the pair's eyes visible). As established on various occasions, the can also has a back door.

Oscar shares his trash can with many pets. This diverse menagerie includes goats, a horse, elephants (notably Fluffy), a dolphin, and his favorite pet, his beloved pet worm Slimey. Irvine, Grundgetta and other Grouch friends and relatives are frequent visitors.

Key exceptions have occurred over the years, however. While Big Bird was helping get ready for Miles' arrival on Sesame Street a lonely Snuffy entered to play catch with Fluffy in episode 2122. Wanda Cousteau sought refuge in the trash can in episode 3163 as a hiding place from the hungry Wolfgang. When Gina is studying to become a vet in episode 3787 she goes down into the trash can through the back door and successfully removes a splinter from Fluffy's foot with some elephants' tweezers. In a season 19 insert, Linda sat in the trash can when filling in for an "Ask Oscar" segment. In a season 12 segment (found in Sesame Street: 40 Years of Sunny Days) in which Oscar and Bruno go to the movies, the various humans (and Barkley) arrive from inside the trash can as well.

The inside of Oscar's trash can was later shown in episode 3997, though this time, the inside was a lot more like the normal inside of a trash can.

In addition to being able to store a wide variety of items in his trash can, Oscar has also put holes into the bottom and has been able to walk with his legs outside of the bottom. He first walked like this in episode 0276. He has continued to travel like this for many years, though he has also frequently been seen outside of the trash can. Outside of the show Oscar has traveled with his legs sticking out of the bottom in Christmas Eve on Sesame Street, the Sesame Street Live stage shows and Don't Eat the Pictures. This feature was also utilized in the opening dancer number in Julie on Sesame Street, where a series of dancing trash cans with fuzzy grouch legs danced with Julie Andrews.

In season 46, Oscar's trash can changed locations for the first time in the show's history, moving into a dumpster unit with a recycling bin in the low wall outside of 123 Sesame Street under Gordon and Susan's apartment.

Oscar's can is a favorite photo op for celebrities and other visitors to the set. 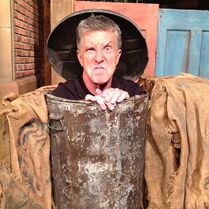 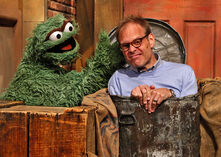 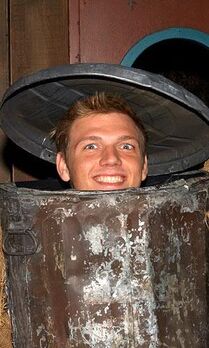 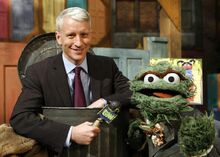 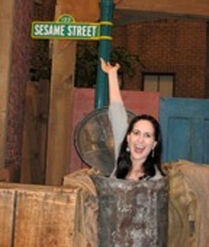 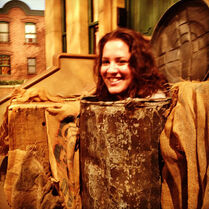 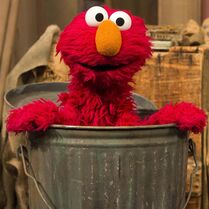 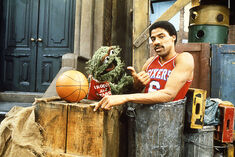 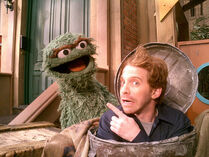 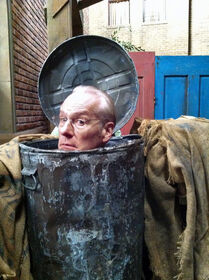 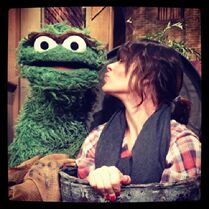 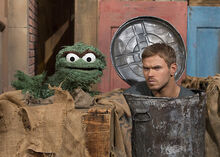 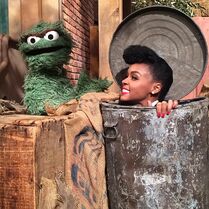 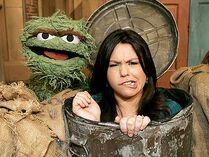 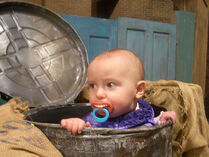 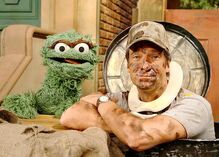 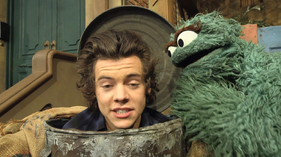 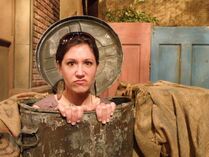 Kelly Vrooman
Add a photo to this gallery

Retrieved from "https://muppet.fandom.com/wiki/Oscar%27s_trash_can?oldid=793455"
Community content is available under CC-BY-SA unless otherwise noted.