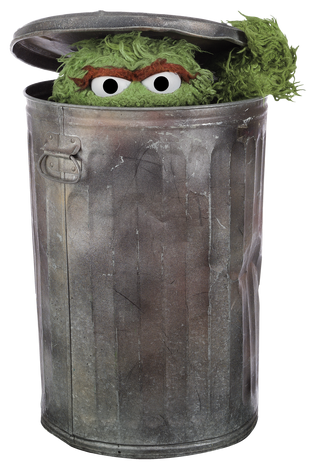 While Oscar has had many pets, his closest companion is his worm, Slimey. He also has a girlfriend, a Grouch named Grundgetta, although a romantic relationship between two Grouches is understandably rocky (Oscar had previously courted grouches named Trashini, Matilda, and Hermine). Grundgetta usually calls him Oskie, while he occasionally calls her Grungie. The two got engaged in Episode 3609, but called off the wedding out of fear that they would make each other too happy. Telly Monster and Elmo both consider Oscar to be a close friend, although Oscar disputes this since Telly and Elmo are the two monsters whom Oscar doesn't like at all. However, Oscar reluctantly confirmed in Grouchland that the latter was indeed his friend.

According to Sesame Street Unpaved, "The character of Oscar was inspired by a nasty waiter from a restaurant called Oscar's Tavern in Manhattan. Jim Henson and Jon Stone were waited on by a man who was so rude and grouchy that he surpassed annoying and started to actually amuse both Jim and Jon. They were so entertained that going to Oscar's Tavern became a sort of masochistic form of luncheon entertainment for them, and their waiter forever became immortalized as the world's most famous Grouch." In the Ask Henson.com web column, Jim Henson Company Archivist Karen Falk said that the restaurant was named Oscar's Salt of the Sea—and went on to say, "Some of the designs that we have in the Archives were done by Jim Henson on Oscar's paper placemats!"

Caroll Spinney has said that he based Oscar's voice on another New York resident -- a Bronx taxi driver who drove him to work on his first day performing the character. When Spinney got into the cab, the driver snapped, "Where to, Mac?"[1] This event was referenced in Sesame Street's 50th Anniversary Celebration, where Spinney dubbed the voice of a cab driver uttering the same quote.

While Jim Henson's first Oscar sketches were colored purple, the original Oscar puppet was orange (Henson later said in an interview that this change was made because the early cameras weren't good enough to capture the color right[2]). In chapter nine of the book The Wisdom of Big Bird, Caroll Spinney states that the Oscar puppet was rebuilt about a month after Sesame Street had started taping. Henson tore apart the original puppet, and a new puppet was built. An early version of the green Oscar debuted on The Flip Wilson Show in 1970 and Oscar's explanation for that was that he had vacationed at Swamp Mushy Muddy, where the dampness had turned him green overnight. In a 2003 appearance, Oscar stated that while his time in Swamp Mushy Muddy made him appear green, he is still in fact orange underneath all the slime and mold. (With an exception, he's just never taken a bath).[3]

During the first season of Sesame Street, the street set was arranged in such a way that Caroll Spinney, who was right-handed, was forced to operate Oscar's head with his left hand. A subsequent redesign of the set allowed Spinney to switch hands. For at least one episode that season (Episode 0084), Jim Henson performed the character.

During Caroll Spinney's tenure as the character, in scenes where Big Bird and Oscar (both performed by Spinney) interact with each other, the situation has varied depending on the amount of lines one or the other is given. Whenever Spinney performed Big Bird, a second puppeteer operated Oscar to Spinney's voice. These puppeteers have included Jerry Nelson,[5] Richard Hunt,[6] and Jim Martin.[7] Paul McGinnis also puppeteered Oscar at the 2003 Sesame Workshop Benefit Gala. John Kennedy performed Oscar for an HBO promo in 2016. (YouTube)

In 2015, Spinney stopped physically puppeteering Oscar on the show, but continued to provide his voice for seasons 46 and 47. Spinney also continued to perform Oscar sporadically for live events. By this time, Eric Jacobson was understudying the role of Oscar; sometimes lip-syncing to Spinney's vocals, and performing the voice himself in other appearances and media. With Spinney's formal retirement in 2018, Jacobson became his official successor, performing Oscar full time. See also Caroll Spinney character transitions.

Oscar has many forms of transportation. He can move with his legs sticking out of his trash can, as seen in early 70s episodes of Sesame Street (portrayed by Hervé Villechaize), in the specials Christmas Eve on Sesame Street, Don't Eat the Pictures and various stage shows. He also often has Bruno the Trashman carry his trash can around while he's inside. While the puppet Oscar frequently moves outside of the trash can on his own, his limbs are rarely shown. Rare moments where his full body was shown include Episode 3790 and Episode 4173. In a few episodes, he has also made out-of-his-trash-can appearances during which the top half of his body is shown. When he sings, "I'm Sad Because I'm Happy" we see his feet splash in the mud but his voice is off-screen.