Despite being one of Sesame Street's major characters, Oscar would not get a walk-around of his own until 2012. Prior to 2012, Oscar was portrayed as a puppet whose appearances were mostly limited to Sesame Street Live and Sesame Place. At the behest of Sesame Workshop, Oscar became a walk-around character, allowing him to fulfill his abilities as well as interact with parkgoers (a move similar to Disney changing the Mad Hatter at their theme parks from a costumed character to a live actor, for the same purpose).

The standard design consists of Oscar wearing his trash can around his waist with his legs sticking out from the bottom of the can. Just as he does in many illustrated appearances and merchandise, he wears the lid on his head like a hat. 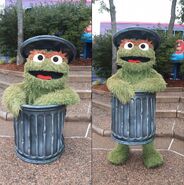 Oscar has the ability to crouch down and get up while inside his trash can.

Universal Studios Singapore. At USS, Oscar has a sneaker attached to a string from inside his can that he shows to guests.

Oscar made his debut as a walk-around in Sesame Street Live in 2017, designed by Animax. Unlike the regular walk-around, this version cannot crouch down while inside the can, nor does he wear the lid on his head. He also appears in a different trash can. 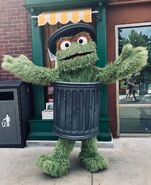 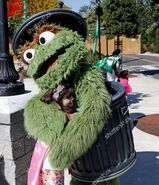 Oscar dressed up for Christmas at Universal Studios Singapore 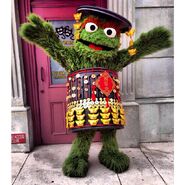 Oscar in the Junkanoo parade at Beaches Resorts (with Slimey on his hat).

Oscar dressed as a pumpkin for Halloween at Busch Gardens Tampa.

Oscar at Selva Magica. Does not wear the lid on his head, but is able to crouch down while inside his can.

Oscar at La Feria de Chapultepec.
Add a photo to this gallery

Oscar previously appeared in walk-around form in the Sesame Street Live show Silly Dancing, when he emerges from his trash can to sing "Everything in the Wrong Place Ball" with Grundgetta. However, this was only a one-shot appearance.

Retrieved from "https://muppet.fandom.com/wiki/Oscar_the_Grouch_walk-arounds?oldid=1192693"
Community content is available under CC-BY-SA unless otherwise noted.