Our Place was a 1967 summer replacement series on CBS produced by The Ed Sullivan Show production company. It ran from July 2 until September 3.

Rowlf the Dog was featured in the opening credits of the show and served as emcee to a number of variety acts, including a weekly guest star. His own performances include a duet with Carol Burnett (the guest in the first episode), and some of his earliest appearances playing the piano. Additionally, the Muppets performed a sketch with a balloon-headed character conducting "The Blue Danube" to an orchestra of popping balloons, as his own head deflates. This sketch would later be seen on The Muppet Show episode 112 as the sketch "Evening at the Pops".

The show also featured the Doodletown Pipers and comedians Burns and Schreiber. Jack Burns became the first head writer for The Muppet Show in 1976. 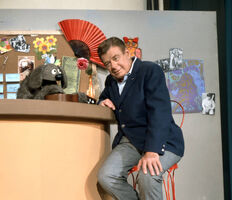 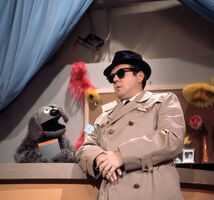 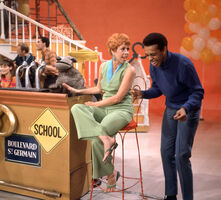 ...Carol Burnett, and Nipsey Russel.
Add a photo to this gallery
Retrieved from "https://muppet.fandom.com/wiki/Our_Place?oldid=1351355"
Community content is available under CC-BY-SA unless otherwise noted.