Outside Lands Music and Arts Festival

The Outside Lands Music and Arts Festival is a music festival held annually in San Francisco, California, at Golden Gate Park. The first festival occurred in 2008, and included over 60 musical acts from around the world, as well as several art installations.

Dr. Teeth and the Electric Mayhem appeared at the Outside Lands in 2016 during the festival which ran from August 5th to August 7th. The band's appearance took place on August 7th at 4PM PT and lasted roughly 24 minutes. Other featured artists include Radiohead, Lionel Richie, Duran Duran, Third Eye Blind, and Sufjan Stevens.

The concert was live-streamed on the Outside Lands website as well as through the go90 app. Before the concert, Dr. Teeth had a brief interview with Yahoo![1] After the concert, Animal and Floyd appeared once more in a roughly 10-minute interview section between Kehlani's and Chance the Rapper's performances.

The Electric Mayhem band (sans Zoot and Lips) appeared in a special web video that was released on April 5, 2016 to announce the festival's 2016 line-up. (YouTube) The 4-minute video was directed by Kirk Thatcher.[2]

The idea for the Mayhem's performance was initially pitched to Kyle Laughlin by a friend working for the festival. To help the Muppet performers (clad in black during the entire performance) sustain their arms in the air, a special harness was devised for the show.[3]

according to the band's bio on the festival's website listing[6]

“They’ve been called 'rock & roll legends,' 'hipster icons' and 'those painfully loud next door neighbors,' but Dr. Teeth and The Electric Mayhem think of themselves as simply a group of friends who are musicians and their only goal in life is to make audiences shake, rattle and groove.

In addition to travelling in their rainbow-hued bus, The Electric Mayhem is the house band for Up Late with Miss Piggy, featured on the primetime ABC television series the muppets. 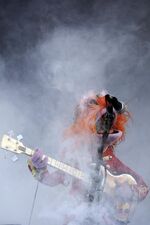 Wikipedia has an article related to:
Outside Lands Music and Arts Festival
Community content is available under CC-BY-SA unless otherwise noted.
Advertisement