Ozzy Osbourne (b. 1948) is a musician active in the industry since the 1960s. He's known for an urban legend that consists of his biting the heads off of bats during stage concerts. From 2002-2005, he appeared in a reality show called The Osbournes with his wife Sharon Osbourne, and their daughter Kelly Osbourne.

In 1994, he recorded a version of Born to Be Wild with Miss Piggy for Kermit Unpigged.

He appeared alongside Kermit the Frog at the Golden Jubilee for Queen Elizabeth II in 2002, and posed for a press photo with Kermit that recalls his tendency for biting animal heads.

"Yakety Yak - Take It Back", a 1991 recycling PSA that aired on Sesame Street, featured Osbourne.

He and Sharon appeared on the May 13, 2005 episode of Jimmy Kimmel Live with Fozzie Bear and Rizzo the Rat who were there promoting The Muppets' Wizard of Oz. 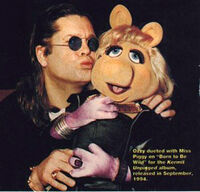 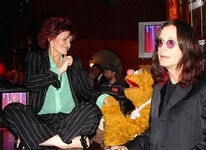 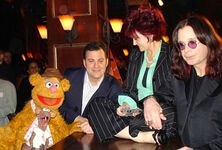 Jimmy Kimmel Live
Add a photo to this gallery

Wikipedia has an article related to:
Ozzy Osbourne
Retrieved from "https://muppet.fandom.com/wiki/Ozzy_Osbourne?oldid=1074916"
Community content is available under CC-BY-SA unless otherwise noted.