P.K. is the Principal Keeper of the Lighthouse, which has a hole that leads to Fraggle Rock. He is the Captain's nephew.

P.K. joined the United Kingdom version of Fraggle Rock in the fourth (UK) season, following the death of Fulton MacKay, who played the Captain in the first three seasons.

When first arriving at the Lighthouse, P.K. disliked being the keeper and also disliked having to live with Sprocket (as he hated dogs). However, as he spent more time with Sprocket, he began to form a bond with him and the two began to get along. He, along with Sprocket, were both fans of Arsenal F.C. 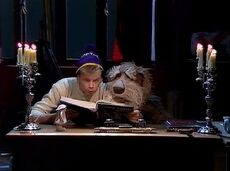 P.K. and Sprocket reading a scary book
Add a photo to this gallery
Retrieved from "https://muppet.fandom.com/wiki/P.K.?oldid=1374117"
Community content is available under CC-BY-SA unless otherwise noted.