P Is for Princess is a Sesame Street video release focusing on fairy-in-training Abby Cadabby. The video includes the 2010 appearance by Paul Rudd as a Prince who tries to rescue Abby and Rosita, as well as Natalie Portman and Elmo in "The Princess and the Elephant". Also featured are the street scenes from episode 4157 and episode 4139. The video also includes introductions by Abby previously used in international productions, such as 3, 2, 1 ¡Vamos!. 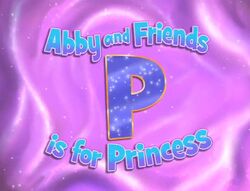 Add a photo to this gallery
Retrieved from "https://muppet.fandom.com/wiki/P_Is_for_Princess?oldid=534367"
Community content is available under CC-BY-SA unless otherwise noted.