The Fraggles sing "Pass It On" in the Fraggle Rock episode "The Perfect Blue Rollie," in which they passed rollies around to each other in the spirit of giving.

They sing it again (with slightly altered lyrics) for Kermit and Robin the Frog in A Muppet Family Christmas, this time singing about passing Fraggle pebbles on to each other.

The song was also featured in the Fraggle Rock animated series, in the episode "A Growing Relationship."

Wembley and Red later sang the song as part of a medley during the Jim Henson's Musical World concert at Carnegie Hall on April 14, 2012.

An instrumental of the song is used as the score for the Fraggle Rock: Rock On! webisode "The Fraggletastic Talent Show!" 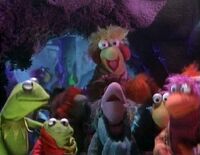 A Muppet Family Christmas
Add a photo to this gallery

Retrieved from "https://muppet.fandom.com/wiki/Pass_It_On?oldid=1274043"
Community content is available under CC-BY-SA unless otherwise noted.