Pat Nixon (1912-1993) was a former First Lady and the wife of the 37th President of the United States, Richard Nixon.

Nixon was photographed with Big Bird for the White House children's Christmas party in 1970. The former first lady also arranged a tour of the Sesame Street set in January 1981 for her granddaughter Jennie, and her grandson Christopher.[1] 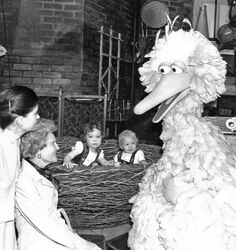 Wikipedia has an article related to:
Pat Nixon
Retrieved from "https://muppet.fandom.com/wiki/Pat_Nixon?oldid=1178746"
Community content is available under CC-BY-SA unless otherwise noted.