Ludwig van Beethoven wrote his Piano Sonata No. 8 in C Minor, op. 13 in 1798 when he was 27 years old. It was published a year later, and referred to as his Pathétique Sonata by the composer himself.

Rowlf the Dog performs the Pathétique twice on The Muppet Show. First in episode 221, he has to bring the piece to an abrupt end when Scooter informs him that he's out of time. He tries to play it a second time for the UK Spot in episode 313 but the Bust of Beethoven on his piano keeps falling asleep during the performance.

The song is used as the backing score to a Sesame Street sketch where Cookie Monster creates a cookie painting. 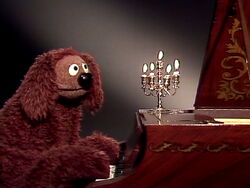 Rowlf's performance in episode 221
Add a photo to this gallery

Wikipedia has an article related to:
Piano Sonata No. 8 (Beethoven)
Retrieved from "https://muppet.fandom.com/wiki/Path%C3%A9tique?oldid=1159070"
Community content is available under CC-BY-SA unless otherwise noted.