Patton Oswalt (b. 1969) is an American stand-up comedian, actor, voice actor, and writer. He made his acting debut on Seinfeld and became well known for playing Spencer Olchin on The King of Queens. Oswalt has since garnered many notable roles, including the Koenigs on Marvel's Agents of S.H.I.E.L.D., Max on the Netflix revival of Mystery Science Theater 3000, and narrating The Goldbergs (as the adult Adam Goldberg). Oswalt's prolific voice credits include Remy from Pixar's Ratatouille and guest spots on various animated series ranging from BoJack Horseman and Rick and Morty to SpongeBob SquarePants and Doc McStuffins.

Oswalt married Meredith Salenger in November 2017. On their one month anniversary, he surprised Salenger with a visit to the Sesame Street set during production of Season 49. Oswalt also appeared in the celebrity "Happy Dance" segment, seen dancing with Cookie Monster, Rosita, and Prairie Dawn. (First: Episode 4904) He also shared a Sesame Street memory in a video published to social media on November 13, 2019. 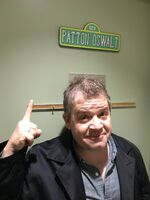 Oswalt pointing under his own personalized Sesame Street sign. 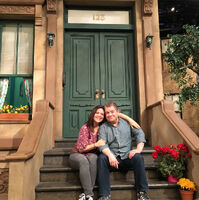 Oswalt and Salenger on the set. 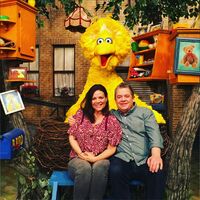 Oswalt and Salenger with Big Bird. 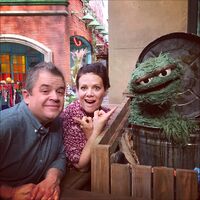 Oswalt and Salenger with Oscar.
Add a photo to this gallery

Wikipedia has an article related to:
Patton Oswalt
Retrieved from "https://muppet.fandom.com/wiki/Patton_Oswalt?oldid=1254379"
Community content is available under CC-BY-SA unless otherwise noted.