Paul Goddard is a British born actor working in Australia. He played Stark in Farscape and Farscape: The Peacekeeper Wars, and also appeared as Farmer Hoggett's son-in-law in the Creature Shop film Babe.

Goddard's other film credits include The Matrix (as Agent Brown), Mighty Morphin Power Rangers: The Movie, The Everlasting Secret Family, and Holy Smoke. TV credits include a Hart to Hart TV movie, episodes of Water Rats and The Lost World, and a recurring role on the British soap opera Coronation Street (as Stephen, 1995-1996). 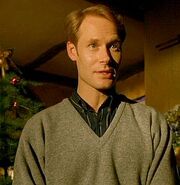 FarscapeStark
Add a photo to this gallery

Wikipedia has an article related to:
Paul Goddard
Retrieved from "https://muppet.fandom.com/wiki/Paul_Goddard?oldid=1075005"
Community content is available under CC-BY-SA unless otherwise noted.