"Paul Revere" is a long-legged horse in New Balance sneakers who debuted in episode 221 of The Muppet Show, in the musical number "Don't Fence Me In." Although the character was never directly addressed by name, he was referred to as "Paul Revere" in a line from "Fugue for Tinhorns" in episode 305.

He was later ridden by Billy Crystal in the "City Schtickers" sketch in episode 103 of Muppets Tonight, performed in this instance by Kevin Clash. According to The Muppets Character Encyclopedia, he previously had a career as a horse racing jockey, which he gave up after the other horses complained.

According to backstage photos in Of Muppets and Men, the horse's head and voice were performed by Jerry Nelson in his first appearance, with the legs performed by Richard Hunt and Dave Goelz. The torso and saddle were stationary, so that Hope could safely sit upon them, and the entire puppet was placed against a moving backdrop to create the illusion of a trotting steed.

He also appeared in episode 307 of The Animal Show.

The horse has a cameo appearance in the 2012 storybook Green and Bear It, where he's called "Mr. Horse". Fozzie Bear asks the horse if he can borrow a lucky horseshoe, but the horse can't help -- he wears red hightops instead of horseshoes.

Paul Revere also appears in Muppets Meet the Classics: Fairy Tales from the Brothers Grimm. He is included in the Sleeping Beauty rendition as one of many characters who fall under the sleeping spell after Princess Yolanda Rat succumbs to the spinning wheel. 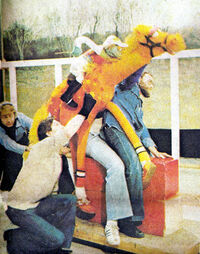 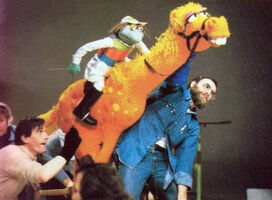 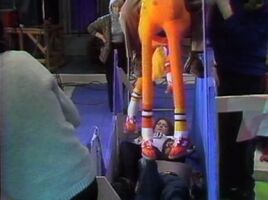 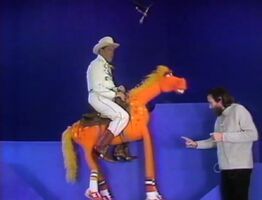 Side view with Jim Henson at the side 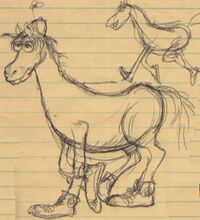