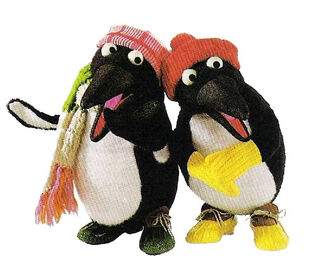 The Penguins are mostly nameless and undifferentiated from one another. Generally playful and wacky in nature, they have appeared in many Muppet productions (sometimes in places where penguins are not commonly seen). They are best known for tossing themselves into the air. The Muppet Penguins usually communicate with sounds that penguins would make, but they have spoken a few times. In The Muppets' Wizard of Oz, the Muppet penguins are referred to by Scooter as "unisex" (gender androgynous or applicable to male and female), reflecting the fact that they function as a collective, identical and indistinguishable.

“What my father figured out was if you can't get out, you just either blow something up, or you eat something, or you just throw penguins in the air.”
—Brian Henson[1]

Brian Henson built the very first Muppet penguin, which was used by Frank Oz for the "Lullaby of Broadway" on The Muppet Show Episode 304.[2] He was given the name Winky Pinkerton in episode 308. He was the only penguin in the cast until four penguins popped up in episode 320's "Hawaiian War Chant." The complete group of penguins appeared for the first time in episode 321, in which one of them is the first Muppet affected by the Cluckitis. In episode 424, a supposed penguin affirms that he's a flamingo disguised with a tuxedo. Groups of penguins include the Pilgrim Penguins and the Endangered Species Chorus Line.

Penguins are featured as musicians in the orchestra pit in a few Muppet productions. In Muppet*Vision 3D, Nicky Napoleon and His Emperor Penguins appeared in both puppet and animatronic form. The penguins also provided the background music for Little Muppet Monsters.

There was also Charlotte the Penguin who appeared in The Animal Show episode "Penguin & Kiwi." In the episode "Indian Elephant and Human," it is shown that a penguin serves as a camera operator for the show.

Nellie Penguin also made an appearance on an episode of Mopatop's Shop.

On The Muppets, Miss Piggy kept a baby penguin, whom she named Gloria Estefan, after smuggling her back from a vacation in Argentina.

Shivers the Penguin, a Caroll Spinney character, made a few appearances in the early 1980s. However, it would not be until the early '90s that an entire array of Muppet penguins would have a more recurring prominence on Sesame Street. These penguins vary slightly from those on The Muppet Show, mostly notably in possessing orange eyelids and light gray beaks. A team of penguin softball players appeared in Episode 4072, while Episode 4112 featured a graduating class of penguins. An entire episode of Elmo's World was dedicated to the Antarctic bird, including one Caesar Penguin. Telly sang a song about having "Six Penguins in My Shirt" in a Season 39 episode.

An Elmo the Musical segment features Elmo as a pilot flying a penguin bride-to-be to her wedding. (First: Episode 4307)

Rosita and her abuela throw a fiesta for their visiting friend, Polly the Penguin, in Episode 5025.