Pentatonix is an a capella music group, originally consisting of Scott Hoying, Kirstie Maldonado, Mitch Grassi, Avi Kaplan and Kevin Olusola. The group rose to fame following their victory in the third season of NBC's The Sing-Off. Kaplan was replaced by Matt Sallee in 2017.

In January 2014, coinciding with their appearance on the show, the group also released a special video from the Sesame Street studios on their YouTube channel featuring a mash-up of "C is for Cookie" and "Rubber Duckie" and featuring a cameo appearance by Cookie Monster himself. (YouTube) A video exclusive to the Sesame Street YouTube channel featured the group singing "C is for Cookie" with Cookie Monster. (YouTube)

The group appeared in The Muppets episode "Pig's in a Blackout" performing their song "Can't Sleep Love" during an electricity-free episode of Up Late with Miss Piggy.

In 2017, Kermit the Frog and Constantine appeared together with Pentatonix for a sketch in their television special, A Very Pentatonix Christmas.

They appear as guests on The Not-Too-Late Show with Elmo in 2020. 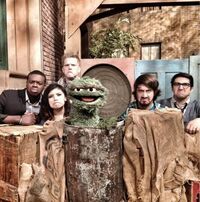 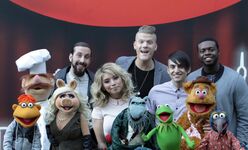 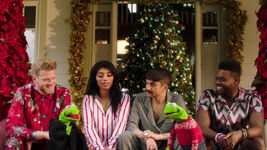 Add a photo to this gallery
Wikipedia has an article related to:
Pentatonix

Retrieved from "https://muppet.fandom.com/wiki/Pentatonix?oldid=1287230"
Community content is available under CC-BY-SA unless otherwise noted.