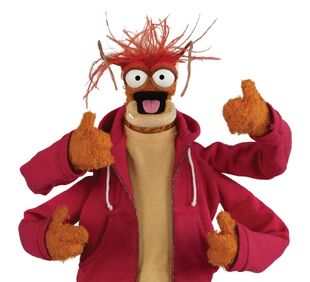 for other uses, see Pepe (disambiguation)

Pepe the King Prawn, whose full name is Pepino Rodrigo Serrano Gonzales, started life in Madrid, Spain. He worked as a chef, before moving to Hollywood and following his true calling in show business. In a TVGuide.com chat in 1999, he remarked, "There were one too many close calls in the kitchen. I was mistaken for an appetizer, okay."

The four-armed Pepe is very proud of being a king prawn, and takes great offense if anyone refers to him as a shrimp ("I am not a shrimp! I am a king prawn, okay?"). He speaks with a heavy Spanish accent, often punctuating his sentences with "...okay?" Puppeteer Bill Barretta, who created the character, based the accent on his wife's aunt, who is known in the family as "Maria Teresa Okay".[1] Due to his sometimes impenetrable accent, Pepe calls the Muppets "Muffins" or "Muppens", and he regularly calls Kermit "Kermin", Fozzie Bear "Fotzie", and Rizzo "Ritzo". He also referred to Scooter as "Scooper" in The Muppets' Wizard of Oz.

Pepe is in love with Hollywood, and expects he will earn several Oscar nominations (for good looks, acting and choreography. And foley.). His influences include Dick van Dyke, Marlon Brando, Ruth Buzzi, Topo Gigio, and Mighty Mouse.[cite] He has also referred to Ricky Martin on at least two separate occasions. In his TVGuide.com chat, he challenged the pop star to a sing-off, and in It's a Very Merry Muppet Christmas Movie, he was invited to shake his "bon bons" at Ricky Martin's South Beach Christmas party.

Pepe is the author of the book It's Hard Out Here for a Shrimp.

Pepe's first appearance was on Muppets Tonight in 1996, as a companion to Seymour the Elephant. The pair worked at the KMUP studios, as elevator operators in the first season and as commissary chefs in the second season, but they always aspired to onscreen singing stardom. These dreams never came true, however, because their performances were dire. They would always sing the same song, with slightly altered lyrics:

The pair only appeared on stage twice -- in the Pierce Brosnan episode, when they were taken hostage by an army of lobsters in a bid to take over the studio, and in the Sandra Bullock episode, when Clifford and Rizzo were desperate for an act to keep the show's ratings above 50.

When Muppets Tonight went off the air, Pepe ditched his partner; Seymour has never appeared again.

At MuppetFest, Bill Barretta explained that originally, Pepe was going to be a mouse, but "We decided an elephant and a mouse was too easy."

Pepe established himself as a "solo act" in the 1999 film Muppets from Space, in which he connives with Rizzo to convince Gonzo that the aliens want him to build a jacuzzi. .

In 2002, he became the official spokesprawn for Long John Silver's, starring in several commercials and appearing on their website. These commercials brought Pepe nationwide attention, and Long John Silver's was deluged with e-mails asking for Pepe merchandise, especially plush dolls. [2]

Pepe served as a correspondent in the early installments of the web series Statler & Waldorf: From the Balcony, where - among other things - he interviewed Jodie Foster and other actors on the red carpet of Flightplan. He was performed by Drew Massey for the "test pilot" of the show.

Pepe's popularity and irreverence, along with Bill Barretta's improvisational skills, have resulted in Pepe's becoming a frequent host of DVD extra features. Pepe hosts much of the behind-the-scenes material on the DVDs for It's A Very Merry Muppet Christmas Movie (Inside Pepe's Studio), The Muppets' Wizard of Oz (Pepe's Exclusive Making Of and an interview with Quentin Tarantino), and Studio DC: Almost Live! (Pepe's Travels); while "Pepe's Profiles" of various Muppet characters were featured on the 'Kermit's 50th Anniversary Edition' releases of The Muppet Movie, The Great Muppet Caper, The Muppet Christmas Carol and Muppet Treasure Island.

Pepe has a brief cameo in the 2011 film, The Muppets, rehearsing a dance number with Miss Piggy; and will appear in 2014's Muppets Most Wanted.

Pepe has always had an attraction to the ladies and developed into a smooth-talking crustacean Casanova—flirting with such women as Rachel Bitterman, Ashanti, Jodie Foster, Bonnie Hunt, Joy, Whoopi Goldberg, and Lady Gaga. . His efforts are sometimes less than successful, as exemplified by Rachel Bitterman's treatment of him in It's a Very Merry Muppet Christmas Movie

In a 2008 interview, Pepe announced that he is a father; sharing that he and his long-time girlfriend, Christine, have a 2-year-old baby.[3] In a later television appearance on CBS's The Late Late Show with Craig Ferguson, Pepe revealed that he and Christina have since become engaged; and stated that he has a total of about 1,300 children all over the world. When asked what he looks for in a fiancé, Pepe responded "breasts."(YouTube)

In a 2013 appearance of ABC's The View, Pepe proposed to Whoopi Goldberg (with Goldberg claiming the two have been a couple for "twenty some odd years"); Pepe appeared in a tux and presented Goldberg with an engagement ring (saying "if you like it, you better put a ring on it") to which Whoopi enthusiastically said "yes!"

Pepe has an affinity to cross-dressing—often wearing a pink tutu. Pepe was first caught wearing his tutu in Muppets From Space; Pepe is caught off-guard when Muppet Lab's invisibility spray wears off and he becomes visible while wearing the tutu and dancing ballet. He wore the tutu again in a 2008 Muppets.com video performing "Prawn Lake" and on Late Night with Jimmy Fallon singing the "nine ladies dancing" line of "The Twelve Days of Christmas." 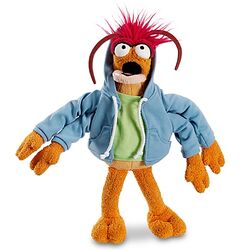 Retrieved from "https://muppet.fandom.com/wiki/Pepe_the_King_Prawn?oldid=732537"
Community content is available under CC-BY-SA unless otherwise noted.