Pete Postlethwaite (1945-2011) is a British character actor who appeared in the Creature Shop productions Alice in Wonderland (as the Carpenter), Animal Farm (doubling as farmer Jones and the voice of Benjamin the donkey), and Rat (as Hubert Flynn).

A veteran of the Royal Shakespeare Company, Postlethwaite has appeared in several cinematic Shakespeare adaptations, including Mel Gibson's 1989 version of Hamlet (as the player king) and Romeo + Juliet (as Father Laurence). Other films include the comedy Brassed Off, Last of the Mohicans, The Usual Suspects (as Kobayashi), Dragonheart, Amistad, The Lost World: Jurassic Park, and the 2006 version of The Omen. 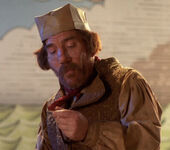 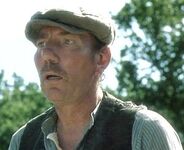 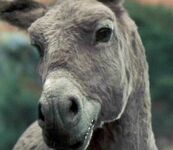 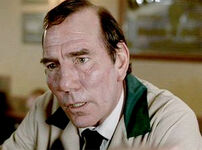 RatHubert Flynn
Add a photo to this gallery

Wikipedia has an article related to:
Pete Postlethwaite
Retrieved from "https://muppet.fandom.com/wiki/Pete_Postlethwaite?oldid=1075080"
Community content is available under CC-BY-SA unless otherwise noted.