Peter Mandell is a little person actor who appeared in Labyrinth as part of the goblin corps. He also appeared in the ballroom scene, behind a red mask.[1]

Mandell's credits include Return of the Jedi (as an Ewok), the 1982 scifi film Xtro (as a toy clown brought to life), and the miniseries 10th Kingdom (as a dwarf, with Mike Edmonds and others). He was also a regular on the 1990 BBC sitcom Pigsty. 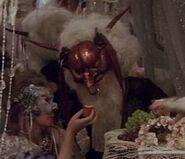 Retrieved from "https://muppet.fandom.com/wiki/Peter_Mandell?oldid=1075119"
Community content is available under CC-BY-SA unless otherwise noted.