Philip Tan is an actor, stuntman, and occasional suit performer. He performed one of the gorillas in the Creature Shop-effects film George of the Jungle.

With a martial arts background, Tan made his film debut in 1980's The Fiendish Plot of Dr. Fu Manchu (with Peter Sellers), as one of the doctor's minions, and went on to a walk-on on Doctor Who, a running part on the short-lived soap opera Albion Market, and henchman roles in Indiana Jones and the Temple of Doom, The Wizard of Oz (as a wheeler, with other puppeteers and suit performers), and Batman. His first gorilla suit portrayal was in 1984's Greystoke, and later followed up with Congo and Tim Burton's Planet of the Apes. 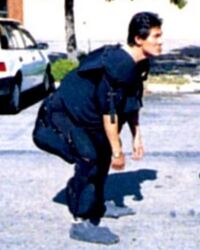 Retrieved from "https://muppet.fandom.com/wiki/Philip_Tan?oldid=1326626"
Community content is available under CC-BY-SA unless otherwise noted.