Picklepuss and Pop are a cat puppet duo created by Caroll Spinney in 1967 for the Boston broadcast of Bozo's Big Top.

In 1988, the puppets were rebuilt as Muppets by the Muppet Workshop and featured in the Jim Henson Play-Along video, Wow, You're a Cartoonist!. In this appearance, Picklepuss is a Hand-Rod Muppet, and Pop is a Full-Bodied Muppet.

Spinney subsequently made several live appearances with the Muppet version of his Picklepuss character. In 2015 at the National Puppetry Festival, Spinney related that he had to retire Picklepuss due to the foam puppet deteriorating. 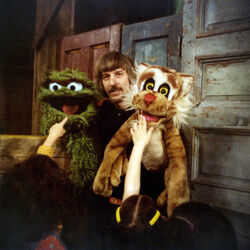 Spinney on the Sesame Street set with Oscar the Grouch and the (pre-Muppet) Picklepuss build.
Add a photo to this gallery
Retrieved from "https://muppet.fandom.com/wiki/Picklepuss_and_Pop?oldid=1243836"
Community content is available under CC-BY-SA unless otherwise noted.