Pierre the French Rat was one of Jim Henson's first puppets, and the oldest surviving today. Pierre was created in a comic strip that Henson drew for his high school yearbook in 1954 -- and when he had the opportunity to create puppets for The Junior Morning Show in 1954, Pierre was embodied as a puppet made of plastic wood.

The Pierre puppet is held by the Jim Henson Company Archives; it's been put on display in traveling exhibits.

Henson's drawing of Pierre from his high school comic strip. 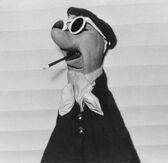 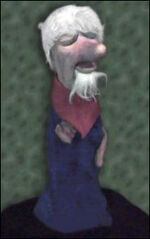 Pierre on display at the Designs and Doodles exhibit in 2003. 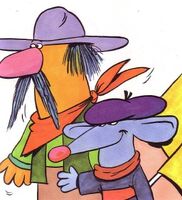 A crudely-drawn Pierre in the book The Value of Imagination.
Add a photo to this gallery

Retrieved from "https://muppet.fandom.com/wiki/Pierre_the_French_Rat?oldid=1154863"
Community content is available under CC-BY-SA unless otherwise noted.