"Pig's Love Song" is a Sesame Street song about a low-voiced hog's self-affirmation of being what he is, and doing things he loves.

There are two versions of this segment; one features an animated pig singing in a pond of mud, (First: Episode 0462) while another recycles live-action film footage of pigs. (First: Episode 0572)

A Broadway-style version of the song was performed by Sooey the Pig in the ending scene of Sesame Street Episode 3525, when she is finally convinced to be proud of who she is. 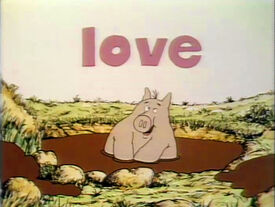