The Pig Baby is the transmogrified form of The Duchess's baby in the Alice in Wonderland story. The baby is prone to sneezing fits from exposure to pepper, and turns into a pig when Alice removes it from The Duchess's home.

When The Muppet Show adapted the story in episode 506, the baby appears as one of The Babies with its mother in the medley of happy songs meant to cheer up Fozzie Bear. By the time the courtroom scene presided over by Marvin Suggs rolls around, it has already transformed into a pig off-screen.

The pig had previously been seen as the patient ("a little Hamlet") in the Veterinarian's Hospital sketch from episode 213, as an Arctic pig singing "Lullaby of Broadway" in episode 304, as a naked, pigpen-confined piglet in "Barnyard Boogie" from episode 504, and later in episode 519 as one of two luau pigs who sing backup on "Hawaiian Cowboy".

The pig's most recent appearance was in The Muppets Take Manhattan during the wedding sequence. She's seated with the rest of the pigs in front of Flute-Snatcher, wearing a red ribbon in her short, blonde hair. 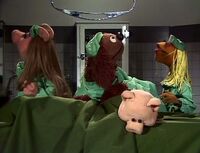 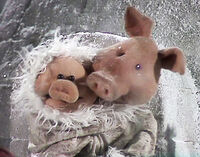 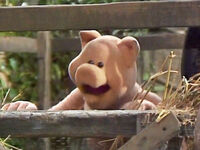 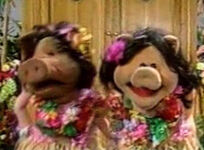 "Hawaiian Cowboy"
Add a photo to this gallery

Retrieved from "https://muppet.fandom.com/wiki/Pig_Baby?oldid=1098395"
Community content is available under CC-BY-SA unless otherwise noted.