Muppet pigeons have made several minor appearances on Sesame Street.

Two pigeons appear singing back-up in a series of 'coo's in "Keep the Park Clean for the Pigeons."

A pair of pigeons named The Pigeon Sisters made appearances during Sesame Street Season 22. The puppets would continue to be used intermittently over the years, such as in the 1992 closing credits, and in the 2007 opening sequence.

A slightly redesigned pigeon appeared in Episode 4033, bobbing along to Cookie Monster's opening song. He was voiced by Joey Mazzarino in this appearance.

A trio of pigeons appear in A Muppets Christmas: Letters to Santa. Their performers were Bill Barretta (the husband), Tyler Bunch (the wife), and Matt Vogel (the son). A pigeon lands on Beauregard's face while he's driving the train in Muppets Most Wanted. 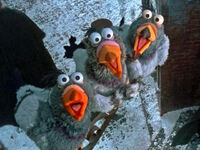 Sesame Street
Add a photo to this gallery

Retrieved from "https://muppet.fandom.com/wiki/Pigeons?oldid=1232662"
Community content is available under CC-BY-SA unless otherwise noted.