In 1981, as part of NASA's morning wake-up call tradition, the crew of the Space Shuttle Columbia were greeted by the cast of Pigs in Space on two consecutive mornings. Mission commander Joseph H. Engle and pilot Richard H. Truly were the crew aboard Columbia for mission STS-2, which was called back to Earth one day earlier than originally planned. Specially recorded by the Muppet performers for this occasion, two separate comedy routines were heard, one on the morning of November 13, and another on November 14.[1]

The sketches were written by Jerry Juhl and featured the regular Pigs in Space cast — Captain Link Hogthrob, First Mate Piggy, and Dr. Julius Strangepork — making their typical bad jokes and puns. Five scripts were written with input from NASA to help incorporate details about the crew.[2] Sally Ride, as the mission's CAPCOM, and two other astronauts met with Juhl and his wife Susan in their Cambria, CA home to consult on the material. Following mission success, the Juhls were visited again and received a photo of the shuttle's launch signed by Steve Negel, Terry J. Hart, Jim Bucki, John Young, Richard Truly, Joe Engle, Ken Mattingly, Hank Hartsfield, Rich Hauck, Dan Brandenstein, and Sally K. Ride. It read, "To Jerry and Susan ("writers to the Stars") -- Many thanks! And may the Swinetrek and the Columbia cross paths again."[3]

According to The Muppet Show Fan Club Newsletter volume 3 number 6, Columbia’s first flight, seven months earlier in April, carried with it "a picture of Miss Piggy...velcroed at the last minute to the cockpit door." 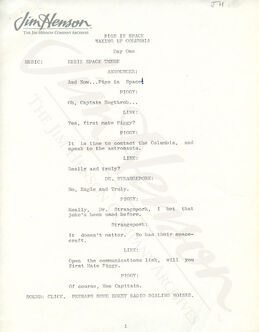 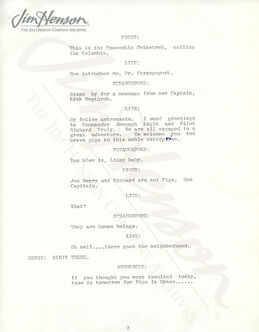 script for the first wake-up call, page 2
Add a photo to this gallery

Retrieved from "https://muppet.fandom.com/wiki/Pigs_in_Space:_Space_Shuttle_Columbia?oldid=1325318"
Community content is available under CC-BY-SA unless otherwise noted.