While hurtling through space one day, Dr. Strangepork announces that he has created a cure for the rash that Miss Piggy gets from outer space. Unfortunately, it is a foul smelling ointment that causes the houseplants to wilt, the computer to shut down, and the clocks to stop. At the urgings of Captain Link Hogthrob and First Mate Piggy, Strangepork agrees to bury the nasty ointment on the next planet they land on.

The Swinetrek crew decides to visit the planet Gazoob, which–according to Piggy's travel guide "Outer Space on $5 a Day"–is celebrating the beginning of spring with a special ceremony. The Gazoobians are very friendly, and are excited to have Earthlings visit–so excited, in fact, that they trap Link, Strangepork and Piggy and decide to make them the next leaders of Gazoob–for the next 40 years! 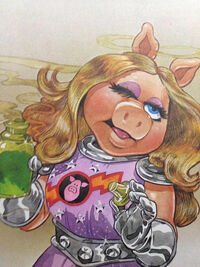 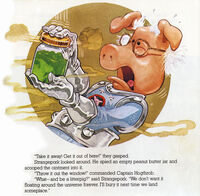 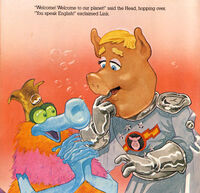 Add a photo to this gallery
Retrieved from "https://muppet.fandom.com/wiki/Pigs_in_Space_(book)?oldid=1098421"
Community content is available under CC-BY-SA unless otherwise noted.