Pigs in Space is a video game produced in 1983 for the Atari 2600 console. This was the last game in Atari's Children's line to be released. The game is a sequence of three mini-games, each starring one of the members of the Swinetrek crew.

In the "Chicken Invaders" mini-game, Captain Link Hogthrob throws sausages at rows of invading chickens before they can land on the planet Cluck. If an egg lands on Link, he turns into a chicken. He can also shoot Gonzo, who controls the chickens from his spaceship at the top of the screen.

First Mate Piggy has been ejected into space in "Pastaroids", and has to fight her way back to the Swinetrek before it leaves her behind. Piggy must avoid the Pastaroids and Noodles to reach the ship in time.

In the final game, "Escape from the Planet of the Gonzoids", Dr. Julius Strangepork pilots the Swinetrek through an abandoned pizza mine, avoiding Gonzo's deadly robots. The Swinetrek is armed with a Boomeray, which shoots straight up and then curves back down to destroy the Gonzoids.

Atari produced a prototype for a second Muppet game, Miss Piggy's Wedding. The children's line was cancelled before that game could be produced. 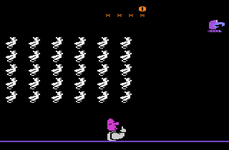 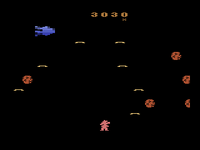 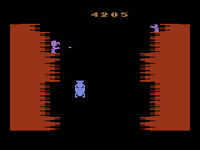 "Escape from the Planet of the Gonzoids"