Pilot is the pilot of Moya, the living ship that is the main setting for Farscape. He is directly connected to Moya's nervous system, and also serves as her voice to the crew. Pilot is gentle and naïve but can also hold his own.

The term "pilot" can also apply to any of the same species of aliens, who can bond with Leviathan ships. The Creature Shop generally recycled the same puppet, with a different voice, for episodes where other "pilots" are involved, such as the pilot for the ship Rovhu (voiced by Sean Masterson) in "Eat Me" and Elack's pilot in three episodes from the third season (voiced by Dinah Shearing). Moya's original pilot (voice of Melissa Jaffer) is seen in "The Way We Weren't." 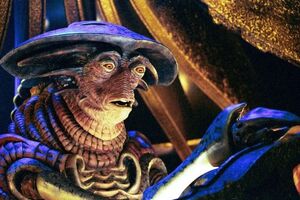 Retrieved from "https://muppet.fandom.com/wiki/Pilot?oldid=1303681"
Community content is available under CC-BY-SA unless otherwise noted.