Pino is the full-bodied character on Sesamstraat, the Dutch co-production of Sesame Street. His role on the street is similar to Big Bird's, whom he physically resembles.

Pino is a large blue bird that represents the psychological age of a four year old. He is always cheerful and eager to learn new things. He is a little younger than his friends Tommie and Ieniemienie, and sometimes he has a little trouble keeping up with them. Being the second youngest, he likes to play with Purk. He is best known for his funny laugh and his catchphrase "Echt waar?!" ("Really?!") He is also very sensitive.

Pino has been a part of the Sesamstraat cast from the beginning in 1976. He started out as a big, clumsy, dopey bird with a Belgian accent; the first episodes were Dutch/Belgian coproductions. He evolved slowly from an ageless bird who is a little slower than the others to a more childlike Pino.

Pino has had many different performers through the years, including Dirk Grijspeirt (1976), Theo Joling (1977), Bert Plagman (1979), Erik J. Meijer (1980) and Leo Dijkgraaf (1984). In 1991, Renée Menschaar started performing Pino, and she has been his regular performer ever since. She is the first woman to play Pino, who has always remained a boy character.

Six different Pino puppets have been used through the run of the show. The first puppet was made by producer Ton Hasebos and was rather plump and messy looking. Ton wanted to let the children use their imagination to decide what kind of bird Pino was, although Ton himself kept a penguin in mind for the design. In a previous television show called Kabouter Kandelaar, Ton had written adventures about Pino the pinguin, who was also blue and close in appearance to the original Pino from Sesamstraat.

Through the years Pino lost a little weight, his white tummy became blue like the rest of his body, his legs grew, and his eyes switched from realistic to cartoonlike, and from blue to black. Chuck Fawcett (from Animax Designs) re-designed Pino in the late 1980s. He continued to build the puppet until 1994.

Pino went through the most drastic change in 1999. In order to make him look younger, his beak was shortened, he got yellow feathers around his eyes and he got colorful feathers on his head.

From the beginning of the series, Pino lived in a nest.

The first Pino nest was on the rooftop, like a stork's nest. It could only be reached by climbing a stepladder. In the 1980s, the nest area was moved downstairs, on a heightened platform.

The nest was abandoned in 2005 when the street set became abstract. These days Pino can be seen sleeping on the beach, or in a bedroom with the other puppets.

Big Bird is not featured on Sesamstraat episodes, but he does show up in dubbed versions of movies and specials on DVD, and in the Sesame Street Live shows.

For a while Big Bird was named Pino in merchandise, but after many confusing name mixups -- ("How can Pino be blue AND yellow at the same time?") -- he became Pino's cousin. Big Bird's Dutch name is Neef Jan; Cousin John in English. 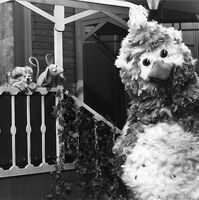 One of the few past Pino puppets. 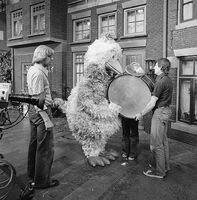 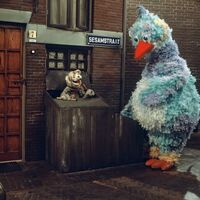 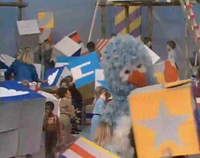 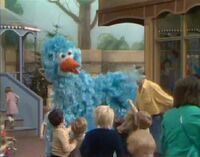 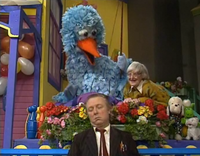 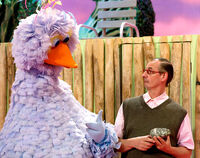 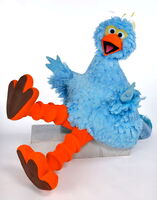 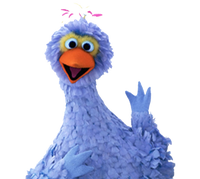