Two Pitchman Pumps named "Regular" and "Premium" sang the praises of Marathon Gasoline in a 1963 commercial called "Out of Town on Business," produced by Jim Henson. The characters featured moving jaws in the handles, and were voiced by professional jingle singers rather than Muppet performers.

In the commercial, the Pumps complain that the gas station attendant gets all the glory. "Who knows better than we do about our feeling of pride?" the Pumps sing. "Cause we've got Marathon gasoline surging inside!" They urge drivers to "give your engine what it wants -- right-now response!"

In 2017, the two puppets were on display at The Jim Henson Exhibition: Imagination Unlimited that opened in Seattle, WA. 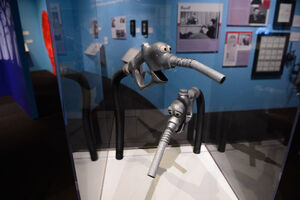 The Pitchman Pumps on display in Seattle in 2017
Add a photo to this gallery
Retrieved from "https://muppet.fandom.com/wiki/Pitchman_Pumps?oldid=1098467"
Community content is available under CC-BY-SA unless otherwise noted.