Ompong "Pong" Pagong is a giant lavender turtle who appeared on Sesame!, the Filipino co-production of Sesame Street. He is around six years old and is very clumsy. Being a turtle, he has the ability to stretch his neck out of his shell. Pong was the show's equivalent to Big Bird.

After Sesame! ended its run, Pong, along with Kiko Matsing, crossed over to the more successful follow-up series Batibot, produced without the involvement of CTW. Both Pong and Kiko were eventually dropped from Batibot due to licensing issues with CTW. 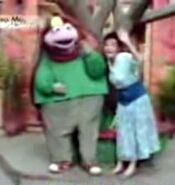 Add a photo to this gallery
Retrieved from "https://muppet.fandom.com/wiki/Pong_Pagong?oldid=1187354"
Community content is available under CC-BY-SA unless otherwise noted.