Pops was featured in the ninth and final series of Palisades Toys' line of Jim Henson's Muppets Action Figures. The figure was the first piece of Pops merchandise.

The budget didn't allow Pops to come with his Muppet Show desk, so Palisades went with Happiness Hotel accessories, recycling the desk that came with the Newsman Action Figure. A small figure of Gaffer, the backstage cat, was included with Pops. The Backstage Playset featured a little space for Gaffer to sit.

The Happiness Hotel guest book reads: "It's weird, but it's cheap!" Inside are signatures of Muppet guests. The Muppets who stayed in the hotel and signed the book are Link Hogthrob, Julius Strangepork, Boppity, Mildred Huxtetter, Hilda, Thog, Baskerville, Droop, Marvin Suggs, Vendaface, Catgut, Gonzo, Fozzie Bear and Kermit the Frog. 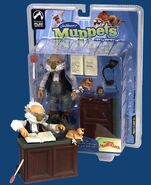 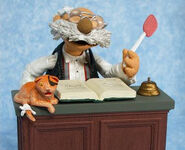 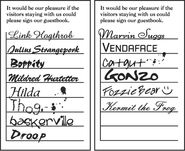 Add a photo to this gallery
Retrieved from "https://muppet.fandom.com/wiki/Pops_Action_Figure?oldid=1240326"
Community content is available under CC-BY-SA unless otherwise noted.