PortAventura Park, known simply as PortAventura, is one of the theme parks at the PortAventura World Resort in Salou, Spain. The main park first opened in 1995, originally as a joint venture between Alton Towers, Tussauds Group, and Anheuser-Busch. In 1998, the majority of Tussauds Group's shares were sold to Universal and the park was rebranded as 'Universal's Port Aventura' (making it the first Universal Studios theme park in Europe) until 2004, when Universal sold all of its interests, and the park reverted to its original name. Woody Woodpecker serves as the park's mascot through a licensing agreement with Universal. PortAventura is currently managed by La Caixa banking group's investment vehicle Criteria.

SésamoAventura has a surface area of 13,000 m2 and took 14 months of completion, with an investment of 15 million euros.[1] Claudio Mazzoli served as the artistic director of the project.

CocoPiloto (Pilot Grover)
A monorail system where guests ride in colorful airplanes all over SésamoAventura.

SésamoAventura Station
A locomotive that takes visitors directly to SésamoAventura, which they can get to from either Mediterrània or Far West. 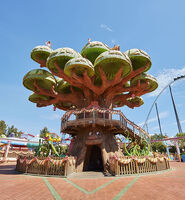 El árbol Mágico (The Magic Tree)
A large tree (standing at 12 meters high) situated at the center of SesamoAventura, where guests can get a view of the area from above.

La granja de Elmo (Elmo’s Farm)
Tractor ride. The tractors also have a button to push for the horn.
Add a photo to this gallery

Loco-Loco Tiki
A Crazy Bus-type ride themed around a tiki.
Add a photo to this gallery 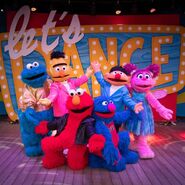 Welcome Big Bird
Christmas
2019
Add a photo to this gallery

Retrieved from "https://muppet.fandom.com/wiki/PortAventura?oldid=1303866"
Community content is available under CC-BY-SA unless otherwise noted.