Potto is a monster who serves as the primary star of Sesame Tree, the Northern Irish co-production of Sesame Street. Potto is a book-loving inventor whose name reflects his tendency to "potter" around with devices. He uses one such machine to communicate with his friends on Sesame Street, including his American relative Telly Monster (although he says in one 2010 episode[citation needed] that Oscar the Grouch is his relative). His best friend is Hilda, an Irish hare, who lives with him in the tree. 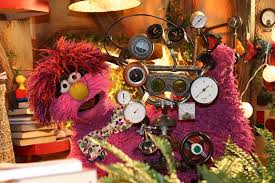 Potto looks through the ol' Pottoscope in the Sesame Tree (circa 2008)
Add a photo to this gallery
Retrieved from "https://muppet.fandom.com/wiki/Potto?oldid=1243311"
Community content is available under CC-BY-SA unless otherwise noted.