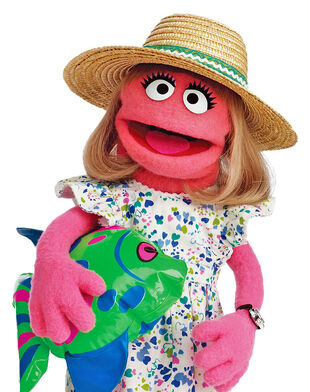 Despite regular appearances throughout the 1990s and 2000s, Prairie's role on the show had greatly diminished since season 39, appearing in very little new material outside of a few live appearances. Prairie recently made major appearances in the 2014 video, Monster Manners, a season 45 sketch and the 2015 special, The Cookie Thief.

Following Fran Brill's retirement, Stephanie D'Abruzzo took over performing Prairie Dawn in new appearances starting in season 46. Starting this season, the character began to make a resurgence in prominence on the show, appearing as the central character in the Orange is the New Black parody, Episode 4608, Episode 4629, and in promo material for the show's move to HBO.

Retrieved from "https://muppet.fandom.com/wiki/Prairie_Dawn?oldid=861557"
Community content is available under CC-BY-SA unless otherwise noted.