President of the United States

The post of President has been a highly sought one since its inception. Candidates, in addition to politicians, generals, businessmen, lawyers, and other real-world figures, have included several fictional personages. From Pogo to Winnie the Pooh, colorful icons have tossed their hats into the rings, and the Muppets are no exception. The most notable candidates have been Big Bird and Miss Piggy.

Big Bird, average resident of Sesame Street, first ran for President in Episode 0797, and learned that being President is a big responsibility. The story was the kickoff for the show's Bicentennial celebration. Big Bird lost in that episode, despite having an elaborate campaign and even a presidential seal.

However, Big Bird's ambitions to become President were eventually fulfilled, albeit on a much smaller scale. In 1988, special elections were held for President of Sesame Place, with no age restrictions or pre-registration required. Big Bird was a leading candidate, with the slogan "Birds of a feather flock together." He faced stiff competition from Cookie Monster, Grover, Ernie, Bert, Prairie Dawn, and in an unprecedented attempt to launch a collective into office instead of an individual, the Honkers. Big Bird won, carrying 24% of the vote. Details of his administration and subsequent activities, and how much executive government a children's theme park would need anyway, remain undocumented. Back on the street, Big Bird later became an outspoken supporter of H. Ross Parrot.

In contrast to the unprepossessing, modest Big Bird, Miss Piggy has been far more open about her ambitions. In 1980, she graced the cover of LIFE magazine, openly announcing her intentions. Buttons were also distributed. Not long thereafter, a running storyline in the Muppet comic strip covered her campaign in great detail; Scooter served as manager. Though that bid was less than successful, Miss Piggy remained dedicated. In 1992, she again made a bid, facing off against Gonzo in a televised debate on Good Morning America.

It's possible that these ambitions may have occurred to Piggy in her formative years. The Muppet Babies episode "What Do You Want to Be When You Grow Up?," in a fantasy song sequence, depicted Baby Piggy as President (introduced by Baby Rowlf in Uncle Sam garb).

Many years later, appearing on The Last Leg in 2018, Piggy was asked if she was considering a run for the Presidency now that Oprah Winfrey was out. She responded, "Oh, no. No no no no. Politics is for people who are not good-looking or talented enough to make it in showbusiness."

The Bird and the Pig have not been alone in their politicking, however.

“An entire generation has grown up with Kermit the Frog. So why not run Kermit for president? With Miss Piggy by his side and Fozzy Bear [sic] as his campaign manager, he can't lose.[2]” 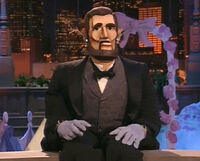 Of those who have served as President since 1789, twenty-two have either been depicted, referenced, or in some cases, personally interacted or collaborated in Muppet projects. These office-holders are listed below, with the dates of their terms.

The First Lady of the United States is the unofficial title of the hostess of the White House. The following First Ladies have worked with the Muppets.

Several politicians who have announced their candidacies for president have also appeared with or been referenced by Muppets.

The figure of President of the United States, whether a portrayal of a historical president or a wholly fictional creation, has been prominently featured in countless film and television productions over the decades. Several Presidential portrayers have also worked in Muppet/Henson productions.

Wikipedia has an article related to:
President of the United States