Princess Cutie is the daughter of the King in the story "Cutie and the Beast". In the story, she falls in love with a beast (portrayed by Grover). The King gives a test to the beast before he consents to his daughter's marriage. The beast succeeds, and kisses Princess Cutie – who turns into a female beast. 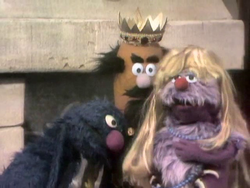 Cutie as a beast
Add a photo to this gallery
Retrieved from "https://muppet.fandom.com/wiki/Princess_Cutie?oldid=1098708"
Community content is available under CC-BY-SA unless otherwise noted.