Project Runway is an American reality television series which currently airs on Lifetime Television which focuses on fashion design and is hosted by Heidi Klum and Tim Gunn.

Miss Piggy was a guest judge for the "All Star" season on January 19, 2012, on the season's third episode, "Patterning for Piggy", where the contestants designed for her. The season is hosted by Angela Lindvall.

The winning look was designed by Michael Costello and is to be transformed into appropriate proportions for Miss Piggy to wear while promoting The Muppets. Gordana Gehlhausen had the lowest score for her design, being sent home but being told by Piggy that she is a true all-star.

Piggy wore the winning outfit during her appearance on Watch What Happens Live on March 13, 2012. 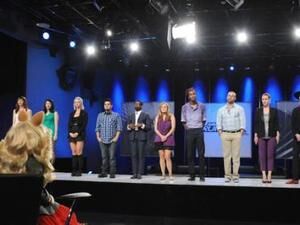 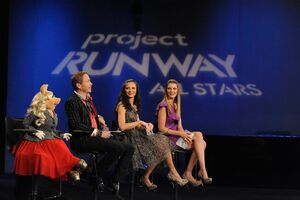 Miss Piggy in the judge's seat 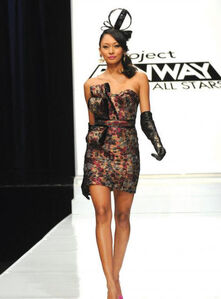 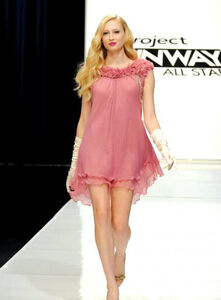 Visit the:
Project Runway Wiki
Wikipedia has an article related to:
Project Runway
Retrieved from "https://muppet.fandom.com/wiki/Project_Runway?oldid=1098745"
Community content is available under CC-BY-SA unless otherwise noted.