Like the origins of many Sesame Street characters, before Elmo became established as a regular on the show, the puppet was used as an Anything Muppet monster with a rotating ensemble of performers.

Some scripts simply call for an assortment of AMs and the end product just happened to use the Elmo puppet; other scripts specifically call for "AM Elmo", but as the AM designation dictates, the puppet is used in a more ancillary manner in these cases and shouldn't necessarily be considered authentic Elmo appearances. 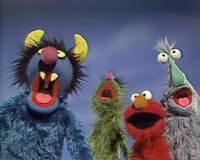 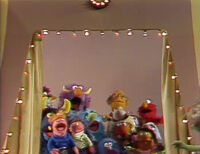 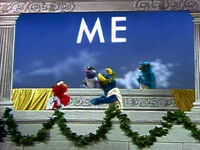 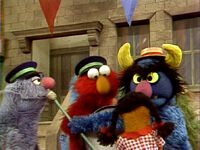 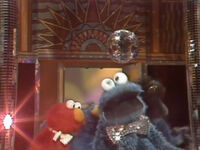 "Me Lost Me Cookie at the Disco"
(First: Episode 1500)
Kathryn Mullen 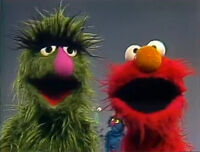 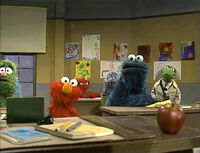 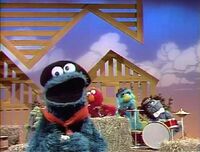 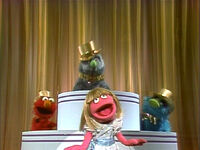 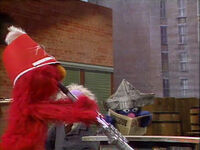 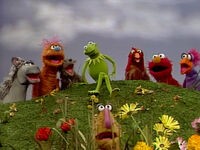 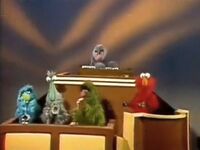 The character definitively appeared named as Elmo in street scenes during Season 11 where he spoke only in mumbles. Brian Muehl originated the character, playing him in at least nine episodes until Season 15's last episode. Richard Hunt picked up the character for a brief stint of six episodes in Season 16, two of which were taped before Kevin Clash took on the character, but aired after. Clash's performance of Elmo at first emulated Muehl and Hunt's characteristics, but he soon developed his own take which became the best known version.

Five of Hunt's six performances as Elmo were shot over the course of three weeks in 1984. The sixth (Episode 2037) was shot on the morning of November 26, the same day Kevin Clash took over the character. In My Life as a Furry Red Monster, Clash recalls that Hunt literally tossed him the Elmo puppet (which he caught in mid-air) saying, "Give it a voice, Clash." Clash's first taped episode in the role, Episode 2026, was shot that afternoon.

Notably, two of Hunt's episodes (Episode 2036 and Episode 2037) did not air until after Clash's debut as Elmo had already broadcast.