Muppet versions of two of the Punch and Judy puppets were created for the last season of The Muppet Show. They are literal hand puppets manipulated by other characters: a Mr. Punch figure, with no apparent moving parts, and a more lively crocodile, with a working mouth.

They are first seen together in episode 508 where Beauregard performed the puppets in the episode's UK spot. In a parallel of Beauregard's traditional use of the puppets' display of physical mayhem, Kermit seems interested in the act, but he unintentionally ignores Piggy, resulting in an act of violence of her own: one of her signature karate chops.

Prior to this scene, the crocodile features as one of the toys in Geppetto's workshop during "Puppet Man." This version has pupils shaped like Kermit's, and (like the other toys in the workshop) possesses the ability to maneuver under his own volition as he dances his way through the number, and then again backstage after the performance. Subsequent appearances of the crocodile use circular pupils for his eyes.

They appeared again as part of the "Scarborough Fair" number in episode 511, and later in framing material for the Muppet Treasures video release.

They returned in the opening song from The Muppet Christmas Carol, again manipulated as puppets by a Whatnot puppeteer (Steve Whitmire). The crocodile gains his own voice in this performance, provided by Jerry Nelson. 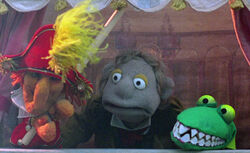