Purk is a piglet from Sesamstraat, the Dutch co-production of Sesame Street.

Purk wears a diaper and a little bow in her ear. She is clumsy and messy and loves to get herself dirty. She can't walk yet and only knows a few words. She is taken care of by everybody on Sesamstraat.

Introduced in 2003, Purk is one of the newest of the Muppet characters, and she's very popular. She was created in order to introduce the subject of "a younger child in the family".

After a week of mysterious hints to a "special surprise", Purk debuted in a Sesamstraat Sinterklaas special. In the special, Tommie runs away from Sesamstraat and gets lost in the forest after refusing to share his stuffed crocodile, Happie, with Purk. After reflecting on his behavior, Tommie is found and decides to give Happie to Purk. With this gesture, he was officially crowned to be Purk's personal knight.

Before the taping of the special, Sesamstraat organized a press convention about Purk's 'birth', hosted by Tommie and Ieniemienie. The newborn Purk came falling out of the sky during the conference. 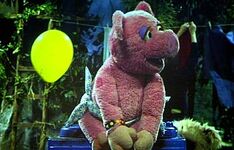 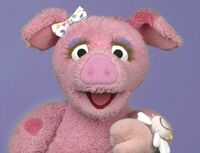 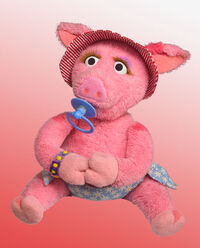 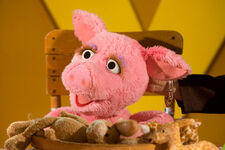 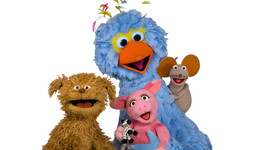 Add a photo to this gallery
Retrieved from "https://muppet.fandom.com/wiki/Purk?oldid=1228190"
Community content is available under CC-BY-SA unless otherwise noted.