Purple Sproingers are beautiful flying jellyfish-like creatures that live in the Gorgs' Garden on Fraggle Rock. They eat stinkweed, an unwanted garden plant.

Their larval forms are large fuzzy caterpillars with voracious appetites, known as Toe Ticklers which get their name from the fact that their fuzzy bodies can tickle the feet of Fraggles. Their pupal forms are pendulous cocoons. 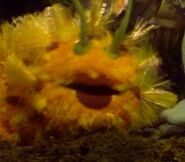 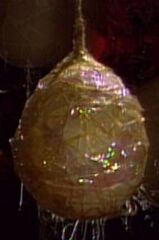 A cocoon hangs from the ceiling of Chimney Hole Cavern.
Add a photo to this gallery
Retrieved from "https://muppet.fandom.com/wiki/Purple_Sproingers?oldid=1160005"
Community content is available under CC-BY-SA unless otherwise noted.