Put Down the Duckie (song)

"Put Down the Duckie", performed by Hoots the Owl and Ernie, encourages one not to let possessions get in the way of other activities. Ernie wants to play the saxophone, but due to the presence of Rubber Duckie in his hand, he can only produce a squeak.

Bob sang a portion of the song in Episode 3085. In a segment from season 27, Ellen DeGeneres listened to the song on a Walkman, explaining to Elmo how portable music players work. (First: Episode 3448) This occasionally led into the original segment (segueing straight into the opening vamp).

In a Play with Me Sesame insert, Ernie uses the song during a game of "Ernie Says" about being happy, angry and sad. In German, the song is known as "Weg mit dem Entchen!"

Ernie and Hoots the Owl performed an abridged version of the song with the Jazz at Lincoln Center Orchestra in a new arrangement by Carlos Henriquez as part of A Swingin' Sesame Street Celebration on October 25th and 26th, 2019. They also reprised the song in Sesame Street's 50th Anniversary Celebration, with appearances from celebrities featured in the special (Whoopi Goldberg, Sterling K. Brown, Meghan Trainor, Itzhak Perlman, Norah Jones, Elvis Costello, and Patti LaBelle).

“I also came up with the idea for song “Put Down the Ducky” one night while eating dinner by myself at a restaurant. The phrase, “You’ve got to put down the ducky if you want to play the saxophone,” came to mind after one vodka on the rocks. Chris Cerf and I wrote the whole lyric around a week later and then he wrote that great tune. The idea to include cuts of celebs came soon after it was recorded and shot. Any celebrity who came to do Sesame Street did their version. I got goose bumps when Ladysmith Black Mombassa [sic] did it.”[1]”

“I think probably what made that song so popular was an idea that Norm and I first had. We thought it would be fun if a whole bunch of celebrities sang “Put Down the Duckie,” very much the way celebrities sang “We Are the World,” which was coming out at that time. But that seemed like an impossible dream.

Jon Stone, the really brilliant creator of Sesame, said, “Well, are you a patient guy?” I said, “Why do you ask?” And he said, “What if we asked each celebrity who came on the show for the next couple of years to sing one line of this song? Within a couple of years, we’ll have an all-star piece.” And that’s exactly what happened. Everybody sang a different line in the song, and then Jon edited it all together.[2]”

During the season that this song premiered, every time a celebrity appeared on the show, the producers would tape a special verse to be sung by that celebrity, and these verses were then edited into the song for later re-airing[3] Not every celebrity in the montage made other appearances on the show that season, such as Itzhak Perlman and Danny DeVito, and for others this was their only appearance: Jeremy Irons, members of the New York Giants, and Gordon Jackson and Jean Marsh. Another celebrity included is Rhea Perlman, who had not appeared on the show before but would appear in a season 22 episode, appearing in the song alongside her husband, Danny DeVito.

The celebrity version was first used in the pledge drive production Sesame Street, Special (first airing on the show in Episode 2534). The closing credits of the special featured another celebrity montage for this song, including alternate takes/verses of the featured celebrities (including a verse from Jane Curtin, who appeared but didn't sing in the insert) and the celebrities who appeared in new footage in the special. The credits were followed by a brief scene in which Hoots the Owl reveals to Ernie that he gets a funny sound whenever he wants to squeeze his Rubber Duckie, and Ernie offers a solution: "You've got to put down the saxophone if you want to squeak your duckie!"

A second version of the celebrity montage was also made, where some celebrities were replaced with others (mostly borrowing from the closing montage of Sesame Street, Special). This version was first shown in Episode 3076. 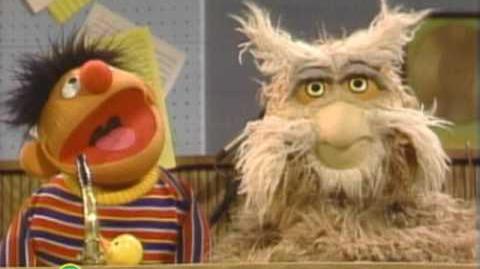