Queen Elizabeth II (b. 1926), full name Elizabeth Alexandra Mary, is the Queen of the United Kingdom as a whole and fourteen other states/territories) and has reigned since 1952. While the President of the United States lives in the White House, her Majesty lives primarily in Buckingham Palace.

Her Majesty takes an active interest in affairs of state, but more often avoids politics and takes a primarily ceremonial role. One example is her attendance at the Royal Variety Performance. At the conclusion of the 1977 performance, she personally congratulated Jim Henson and his puppeteers.

Decades later, Kermit the Frog was one of the many celebrities paying their respects during the Golden Jubilee celebrating her fiftieth year on the throne.

Her son, Charles, Prince of Wales, is the heir apparent to his mother's throne; his The Prince's Rainforests Project PSA included an appearance by Kermit. Her daughter is Princess Anne.

“Diana is possibly the only member of the royal family who doesn't kowtow the instant she is fixed with one of the Queen's terrifying Miss Piggy looks.[1]” 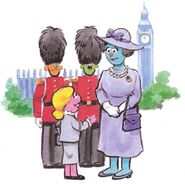 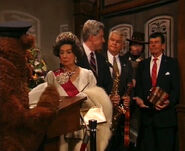 An altered picture of the Queen with Kermit in The Muppets

Wikipedia has an article related to:
Queen Elizabeth II
Community content is available under CC-BY-SA unless otherwise noted.
Advertisement