Rachel Dratch (b. 1966) is an American actress and comedian best known as a cast member of Saturday Night Live.

Dratch was a special guest for Jim Henson's Musical World, where she sang "Sing After Me" with John Tartaglia, as well as "Rainbow Connection" during the finale. She also appeared in the Sesame Street special, The Cookie Thief.

Among Dratch's other credits are numerous guest appearances on 30 Rock, Ugly Betty, Frasier, The King of Queens, Funny or Die Presentes..., and The Cleveland Show. 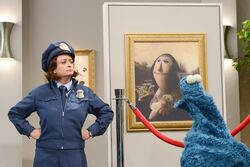 Wikipedia has an article related to:
Rachel Dratch
Retrieved from "https://muppet.fandom.com/wiki/Rachel_Dratch?oldid=1075269"
Community content is available under CC-BY-SA unless otherwise noted.