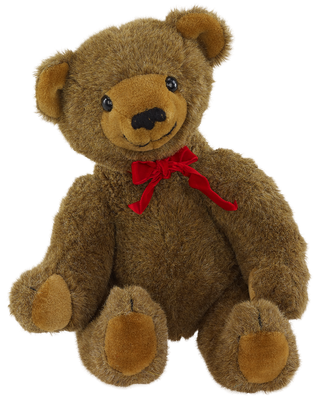 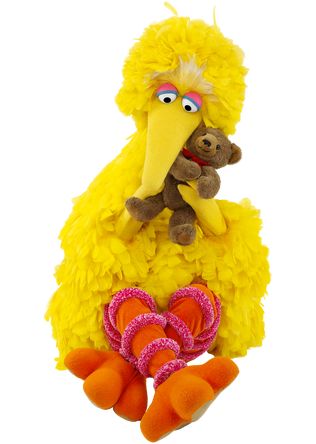 Radar is Big Bird's teddy bear on Sesame Street. Appearing since season 10, he is a brown stuffed bear with a red ribbon around his neck, who was given to Big Bird as a gift from Mr. Hooper.[1][2] Much like Ernie's Rubber Duckie, Radar is Big Bird's most treasured possession, and Big Bird often confides in the bear.

Storylines over the years have involved Radar being ripped (Episode 3922), having gone missing (Episode 3884), or accidentally being sold (Episode 4174). Radar has more often served as a source of comfort not just for Big Bird, but his friends as well: he's loaned out to Baby Natasha in Episode 3651, and stays overnight with Maria at the hospital in Episode 3526. As one of Big Bird's most treasured possessions, Radar even holds the power of restoring his memory when Big Bird contracts the memory flu in Episode 3396.

Radar has often been depicted in Sesame Street coloring books and illustrated books over the years, and in the early 1980s, a stuffed toy Radar was marketed. Radar was also featured in Follow That Bird, where Big Bird sent Radar ahead by "special delivery, bear mail" to keep them from being spotted.

The stuffed bear was named by Big Bird's performer Caroll Spinney as a tribute to actor Gary Burghoff, who played Walter "Radar" O'Reilly on M*A*S*H.[3] The two met at a taping of Hollywood Squares, and the bear's name is a dual tribute, reflecting Burghoff's Radar character, who brought a teddy bear to Korea, and the fact that in his private life, Burghoff is known as a painter of birds and an activist for bird preservation. In Episode 5001, Little Bird's teddy bear is named "Walter," another reference to the M*A*S*H character.

In a Season 39 episode, Big Bird holds a "nest sale" and bumps Radar into the nest where he is selling toys without knowing. Snuffy accidentally sells him to Count von Count who buys all the toys to count them. Kaitlyn then comes back and returns him after the Count gave it to a monster and the monster gave it to her.

Retrieved from "https://muppet.fandom.com/wiki/Radar?oldid=1254116"
Community content is available under CC-BY-SA unless otherwise noted.