"Rag Mop" was a #1 hit for the Ames Brothers in 1950. The song was performed by a group of dancing mops on episode 111 of The Muppet Show. At the end of the skit, George the Janitor comments, "Now that's my kind of act!"

The song was featured on The Tonight Show on September 14, 1976, intercut with footage of the Muppeteers performing the number on set. 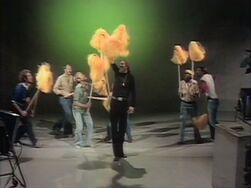 Behind the scenes of "Rag Mop." Jim Henson (center) can be seen puppeteering the lead singer.
Add a photo to this gallery

Retrieved from "https://muppet.fandom.com/wiki/Rag_Mop?oldid=1380011"
Community content is available under CC-BY-SA unless otherwise noted.