"Rainbow Connection" is a song written by Paul Williams and Kenneth Ascher for The Muppet Movie and originally performed by Kermit the Frog. It is sung by Kermit as the movie's opening number and reprised by the whole cast of Muppets at the end of the movie; it since has been featured and reprised in other Muppet productions, including 2011's The Muppets.

The single of this song reached #25 on Billboard's "Hot 100 Singles" chart in 1979 and the American Film Institute named Rainbow Connection the 74th greatest movie song of all time in AFI's 100 Years…100 Songs.[1]

The song was nominated for an Academy Award for Best Song in 1979, and was performed at the awards ceremony the following year.

In 2021, the Library of Congress inducted the song into its National Recording Registry.[2]

When Williams and Ascher started work on the songs for The Muppet Movie, they met at Williams' house with Jim Henson, Jerry Juhl, and Frank Oz to talk about the direction about the songs. Knowing they needed an "I am song", they looked at the setting.[3] Williams and Ascher had a discussion about a film they both loved, Walt Disney's adaptation of Pinocchio. At the beginning of Pinocchio, Jiminy Cricket sings "When You Wish Upon a Star," which the pair felt set the mood for the whole picture. "It opens up you heart, and there's this spiritual awareness." This was the inspiration to write something very special for Kermit as well.[4][3]

Although they had nearly completed the song, they had difficulty coming up with a title until a friend of Williams asked them "What's the problem? You having difficulty finding that rainbow connection between people and their dreams?" They knew at once that they had their title.[4]

In the Music, Mayhem and More! CD booklet, Williams briefly shared the creative process that surrounds "Rainbow Connection" and the movie's finale, as follows:

“It's one of two favorite songs I've written in my life, and oddly, they're both from The Muppet Movie. (The other is 'I'm Going to Go Back There Someday.') When we started working on the film, Kenny and I and Jim and Jerry Juhl all agreed that we had to establish Kermit's soul from the very beginning. And to do that, he has to ponder some big questions. Kenny and I began to write this song -- the song addresses that inner voice that tells Kermit he can try to do these big things. Then Jerry Juhl did this great thing in the script at the end, when the stage explodes and the end of the rainbow appears — the actual 'rainbow connection.' That's the proof of the whole Muppet philosophy.”

Williams later recalled "The amazing thing about the song is that it's a song about questions instead of answers... We start out with Kermit sitting in the swamp... We looked at it and said, well what has he got? He's got water, he's got air, he's got light. You have refraction, you have rainbows. So the first line came immediately."[5]

After the initial meeting with Henson, Juhl, and Oz, Williams assured Jim that he and Ascher would actively update him on the songs. Henson replied, "oh no, that's all right I'm sure they'll be wonderful, I'll hear them in the studio." Williams comments that "There's a level of trust in that, that is so immense."[3]

The opening of The Muppet Movie features Kermit the Frog singing the song while sitting on a log in his swamp, completely surrounded by water. It was one of those "how'd they do that?" moments that Jim Henson loved to create.[6] Rather than use a radio-control rig, like had been used to make Emmet and his ma sing while rowing a boat down the river in Emmet Otter's Jug-Band Christmas, Henson wanted a more precise way to operate the character for the poignant, subtle and emotional performance required and opted to perform Kermit by hand from under the water.

A large swamp set was created in a watertank on the studio backlot (the same tank that was used as the lagoon on Gilligan's Island[7]), complete with real trees that were shipped in from the Georgia bayous.[6] A diving bell equipped with a rubber sleeve was submerged into the tank so that Henson could perform Kermit from inside. Even though oxygen was being pumped in to Henson, and he was in continual contact with the surface via his headset, biographer Brian Jay Jones said it was "like being buried alive."[6] Henson later referred to the set-up as "no place for someone with claustrophobia."[8] There were rescue divers nearby in case of trouble.[9] At one point during the five days it took to film the sequence, Henson spent nearly three straight hours sealed underwater in the cramped diving bell.[6]

Steve Whitmire and Kathryn Mullen used a remote-control device to operate Kermit's hand while he played the banjo in the long shots and manipulated his arms via arm-rods in close-ups.[10]

According to Paul Williams, originally Kermit was going to be seen in the swamp sitting on a lily pad, however it turned into a log because it was easier to position Kermit and hide Henson.[5]

A 1979 Muppet Show Fan Club newsletter answered the question of "How does Kermit sit on a log in the middle of a swamp?":

“Jim Henson squeezed into a specially designed metal container complete with an air hose (to breathe), a rubber sleeve which came out of the top (to work Kermit) and a monitor (to see what Kermit was doing), and positioned himself under the water, under the log, under the frog. Jim spent about five days in this bathysphere. It's not easy...[11]”

The closing reprise of "Rainbow Connection" in The Muppet Movie featured a crowd of more than 250 Muppet characters—virtually every Muppet that had been created up to that point in time. According to Henson Archivist Karen Falk: "137 puppeteers were enlisted from the Puppeteers of America (along with the regular Muppet performers) to perform every Muppet extant. Prior to the day-long filming of the shot, Jim Henson gave the enthusiastic participants a lesson in the art of cinematic puppetry. Amazingly, it did take just one day."[12]

The Muppet Show Fan Club newsletter answered the question of "How did they do it?":

“There are 250 puppets in the last shot of the film, and they're all moving. How? 150 puppeteers in a 6' deep, 17' wide pit, that's how. They were recruited through the Los Angeles Guild of The Puppeteers of America, and almost every puppeteer west of the Rockies reported for pit duty.[11]” 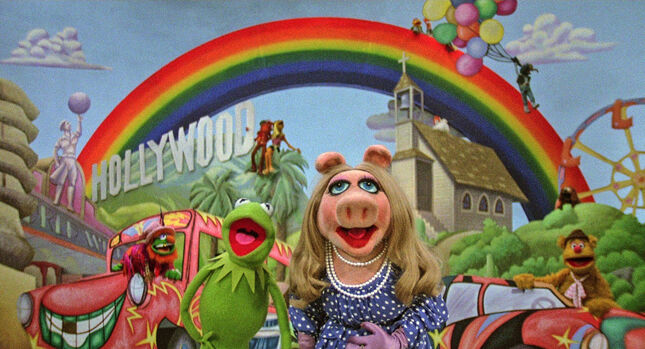 "Rainbow Connection" has been referenced many times, both by Muppets and others: