Randy Jackson (b. 1956) is best known as a judge on American Idol; he is also a Grammy Award-winning bassist, singer, record producer, music manager, and former A&R executive.

Jackson appeared in Sesame Street's 39th season where he introduced the word of the day, Glockenspiel, in Episode 4171. In 2011, an interview segment between Elmo and Randy was released; he revealed that he has a Tickle Me Elmo doll. 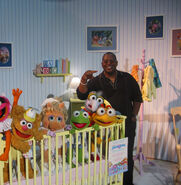 Randy Jackson with the Muppet Babies on display in 2003
Add a photo to this gallery
Wikipedia has an article related to:
Randy Jackson
Retrieved from "https://muppet.fandom.com/wiki/Randy_Jackson?oldid=1075294"
Community content is available under CC-BY-SA unless otherwise noted.